The Beauty in the Detail 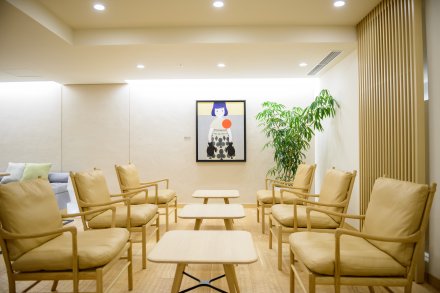 Whether created by a printmaker, glass designer or street artist, the work on display in Azabu Gardens has one thing in common: a contemporary feel that evokes a refined nature.

Given the importance of the exclusive property’s environment, including its location in the fashionable neighborhood of Moto-Azabu and its lush green spaces, it is not surprising that art, too, was a key consideration for the developer Pembroke Real Estate.

“It’s amazing to see the care and consideration put into every single detail,” says Art Curator Diana Gaston, pointing out that the stone floor even incorporates natural stone.

Diana, who has a Masters degree in art history with an emphasis in photo history, believes Pembroke’s approach is unique, giving residents a real sense of identity through the art.

After first visiting Japan in 2005, Boston-based Diana returned in 2008 to work on the first Azabu Gardens property. Now, with 28 years of art curating experience, Diana is delighted to play a role in the completion of the property’s Master Plan.

“This Tokyo project has definitely been the most special for me: taking on a project of this scale and trying to immerse myself in a culture that has such a significant and long history,” she says. 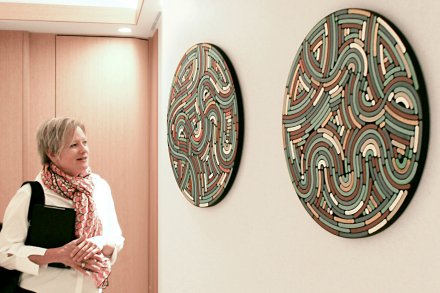 On walking around the property, the essence of Japanese culture can be felt in every space, from the use of traditional techniques and materials to the works that reflect the elements of it.

“The perfection of this work and the simplicity of it seems so fitting for this Japanese interior,” Diana explains, pointing to the three wood panels, by John Bisbee from Maine, outside the Club Lounge. Specifically created for the space, the artist branded 10-inch hot spikes on wood to create unique burn patterns.

Among other work commissioned are two contemporary pieces by Shun Kawakami: one, depicting a waterfall, over the stairs in the lobby and one, depicting a garden, at one of the property’s entrance halls. Born in Japan and schooled in London, he is well known for his skill in combining contemporary and traditional media.

“Shun’s work is a wonderful combination of things,” says Diana. “Here, he is working with a digital image so it is very contemporary but he worked on silver leaf and printed onto very delicate, hand-made paper, inspired by water: a very pure element.”

Diana says that working to fill specific spaces from her office in the US has been challenging and requires a lot of coordination, but she has found treasures at the international art fairs that she attends.

“Some pieces stick in your mind and you know you can find a place for them because they have the right aesthetic,” she says.

One such example is painting by Daigoro Yonekura, which she found at a print fair in New York. His heavily rendered, almost ghostly, piece is rooted in the history of abstract expressionism, explains Diana, pointing out that his organic, open-ended style leaves the viewer to choose what is on display. 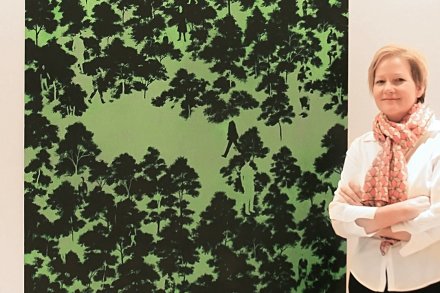 Another piece that is very open to individual interpretation is the freehand drawing of ink on wood by street artist Kami.

“It can be a leap to put a street artist into a refined space like this but the work takes on a very formal presence,” Diana says. “There is an intricacy in the drawings. They transcend culture and even time, taking on meaning wherever they live.”

True to Azabu Gardens’ desire to create homes for families, children’s preferences have been considered in the art, too.

Boston-based Japanese glass-maker Niho Kozuru has created rubber casts in different colors. Those of the same color have been placed on the same floor to act as kid-friendly markers that help direct them to and from their home in a fun way. Though using industrial and mechanical forms such as gears, Niho has turned them into flowers with a sunny disposition, says Diana.

Although each piece of art is special to Diana, she admits to having a favorite: paintings by Rikuji Makabe in the lobby. “I love the way the figures dissolve into the landscape: a dream-like space and something I could look at for a long time,” she says. While this piece was to be hung beside the other half of its complementary pair, an additional space was found to allow residents to enjoy the quiet contemplation that each one, on its own, invites.

As is always the approach in Azabu Gardens, plans are continually adapted and improved upon as the developers seek to provide residents with the best homes in Tokyo.