It was a chilly winter’s day, but the sun was out and the sky was blue—the perfect setting for Azabu Gardens’ annual mochitsuki (Japanese rice cake making) event. 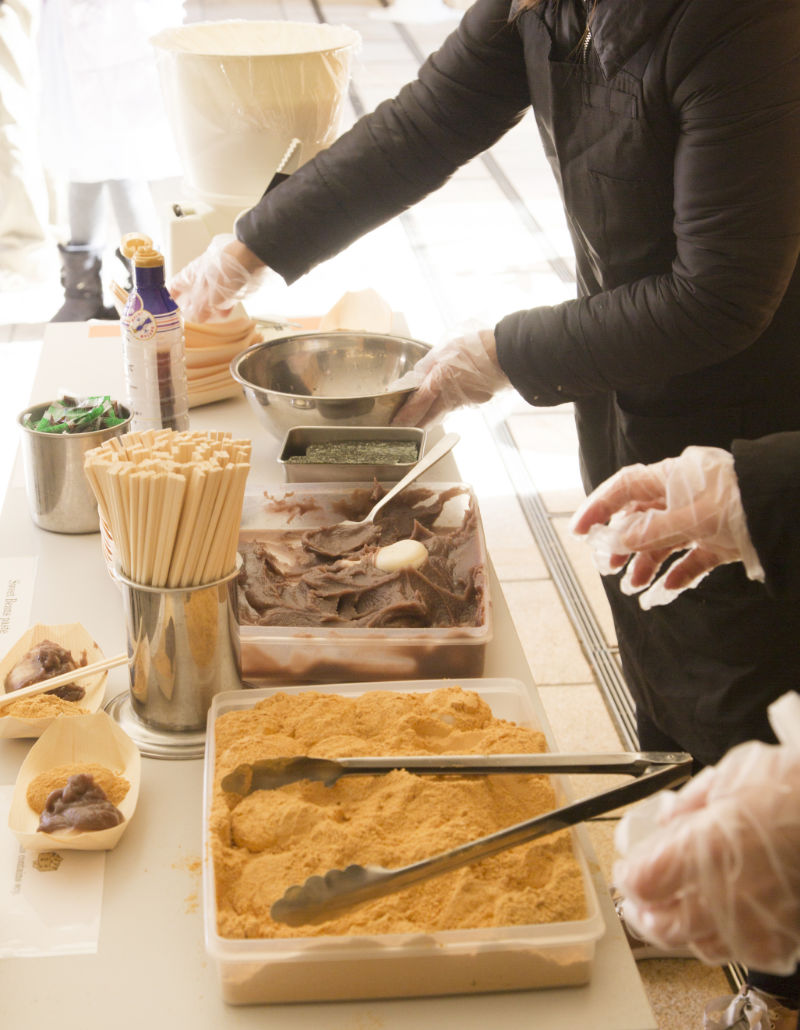 On January 13, to fend off the cold and keep guests warm, tonjiru (pork and vegetable soup), oshiruko (a hot red bean soup with mochi), various types of mochi with an assortment of inventive marinades, seasonings, and toppings, and warm sake were all ready to be devoured.

Traditional seasonings such as azuki (red bean paste), kinako (sweetened soy powder), and nori (dried seaweed) were also ready to liven up everyone’s meal. Some Western seasonings not usually paired with mochi had been tried by Azabu Gardens staff and were on offer. These included cheese, tomato sauce, chocolate paste, cocoa powder, and honey-flavored butter. 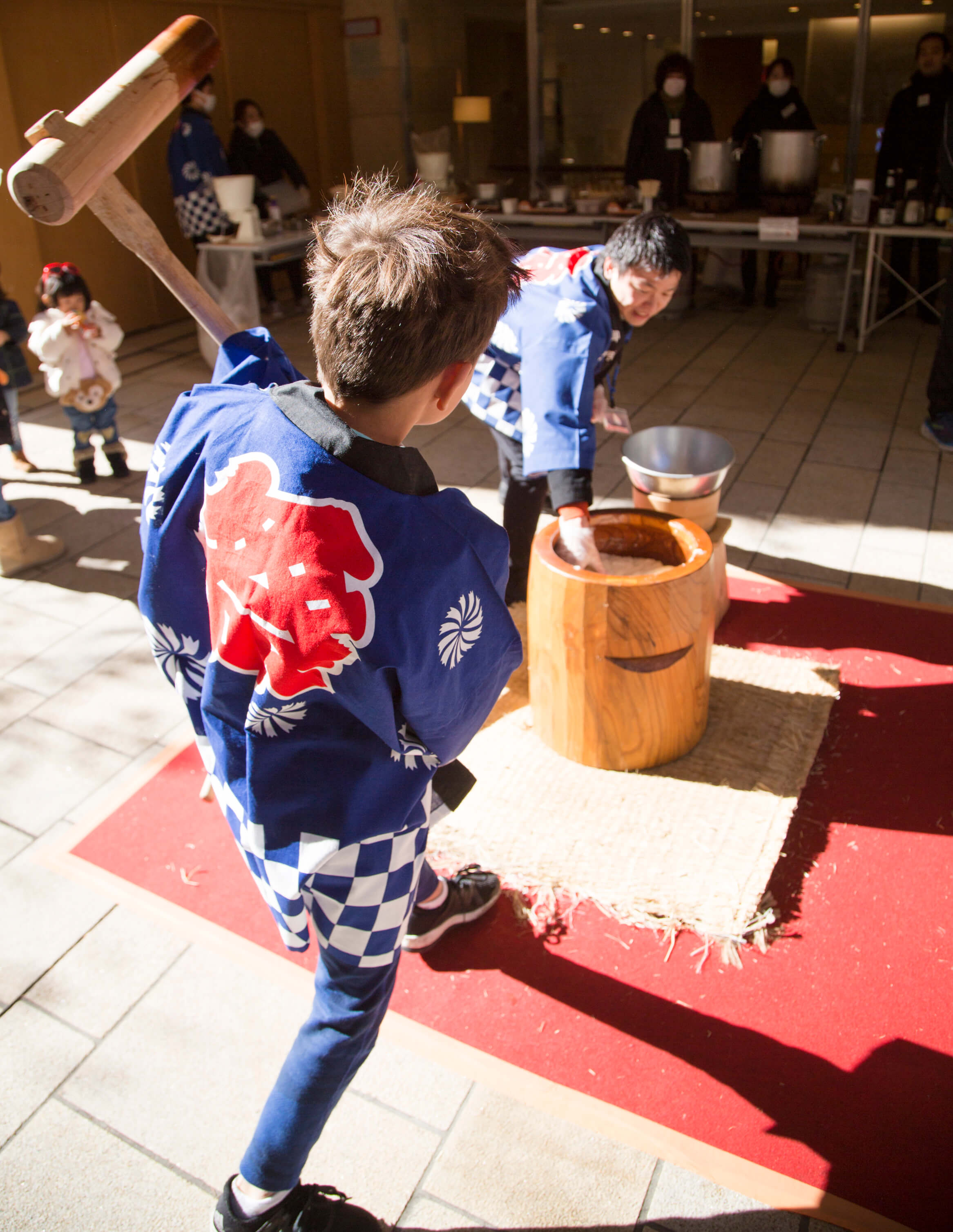 As the sun streamed through the building’s west entrance, it was time for the festivities to begin. Kicking things off was a young boy who was ready and waiting well before the 11:00 a.m. start time. During mochitsuki, mochi is pounded in a large wooden mortar called an usu, with a huge hammer called a kine. Normally, one person pounds while another adds water to make sure the mochi does not stick to the usu.

With each strike of the kine, the crowd cheered “yoi-sho!” The young boy did a great job of swinging the heavy tool, pounding the mochi as hard as he could again and again. Clearly exhausted, he took a few seconds to pause and then swung again!

Next, a girl stepped in to try, swinging the kine nearly 30 times. Although tired, she finished with a huge grin on her face. 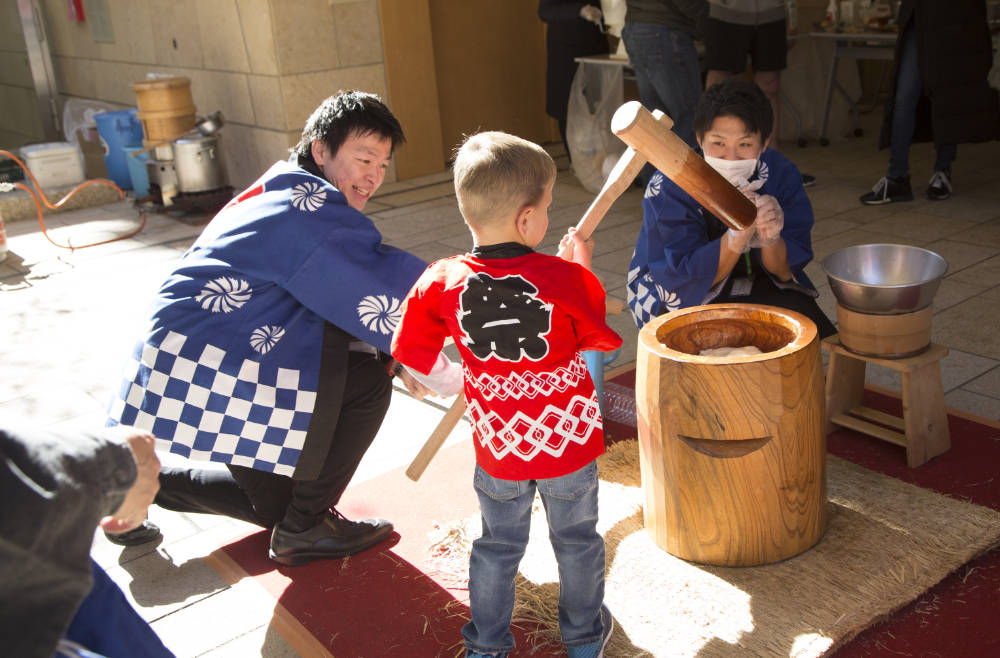 More kids tried after this, each wearing a happi (Japanese festival robe) with the kanji for matsuri (festival) on the back. The kine came in three sizes, meaning the kids did not have to use the heaviest one. But the boys quickly turned it into a competition to see who could manage it.

Some of the smaller children even tried with a little help from their parents, while a grandmother put together a mochitsuki team with three generations of the family. And one father pounded the mochi so hard that other fathers joked he had cracked the usu! 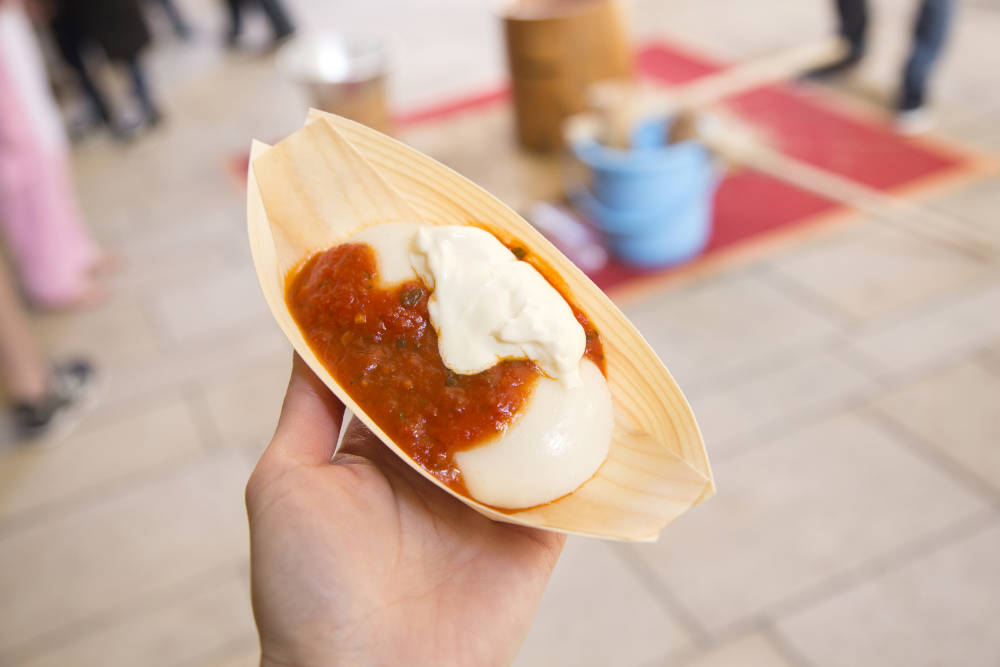 After half an hour, a total of 20 guests were trying the tasty mochi along with the wide variety of seasonings. The most popular was the deep red azuki, while the other seasonings—both Japanese and Western—were also a hit. The tonjiru was a particular favorite, and there was none left by the end of the day! 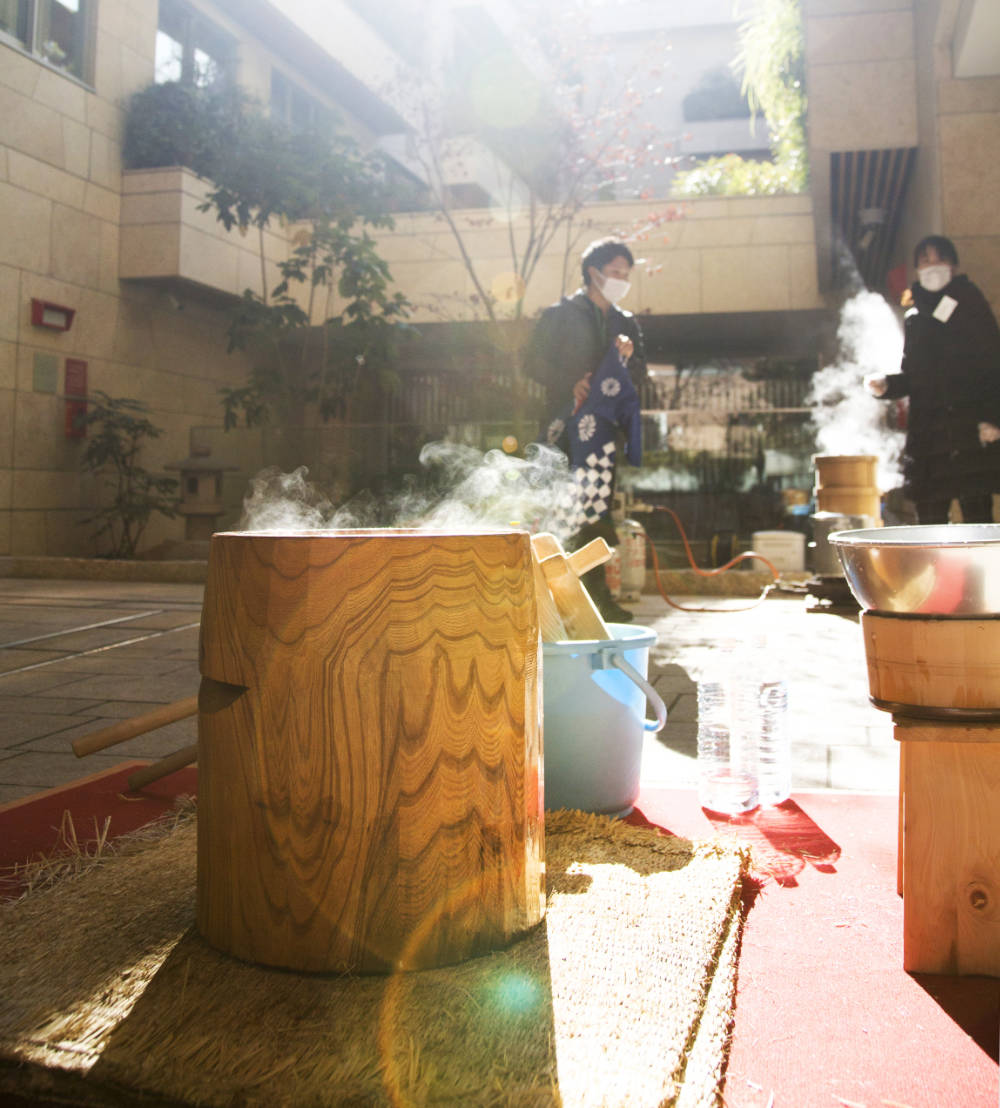 All the while, parents were able to catch up on what happened during the New Year’s and Christmas holidays, and others enjoyed just getting to know each other. The kids were all quickly chatting with their friends, their mouths full of mochi.

Many residents attended and participated on the day, and it was a great, traditional way for the Azabu Gardens community to reunite after the winter break and begin the New Year.