Spring Festival with Residence and Friends

Artistry and Tradition on the Rooftop Terrace 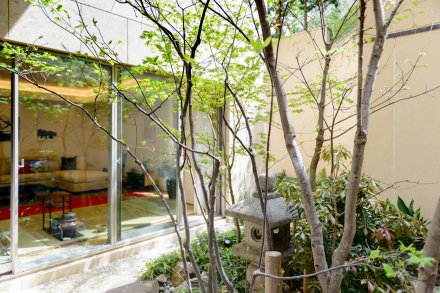 Spring is one of the most beautiful times of the year in Japan. Cherry blossoms—or sakura—paint the landscape in an ethereal shade of pink and an atmosphere of renewal fills the air.

The concrete of Tokyo forces this beauty into select areas, and Azabu Gardens is one of them. To celebrate the annual custom of hanami (flower viewing), a special event was held on the Rooftop Terrace on April 9.

Part of the symbolism of sakura is the ephemeral nature of life. Accordingly, timing hanami can be a tricky endeavor. The volatile weather in late March and early April makes forecasting the time of bloom difficult—and once the blossoms arrive they don’t stay long. This year, by the time residents and guests gathered on the rooftop, the blossoms had fallen. But flowers were still on display at the tea ceremony, and the party captured the full spirit of hanami nonetheless.

The beautiful weather set the stage perfectly for nearly 100 people—a third of whom were children—to gather for a mix of games and culture at our Japanese tea party, festival, and open house. 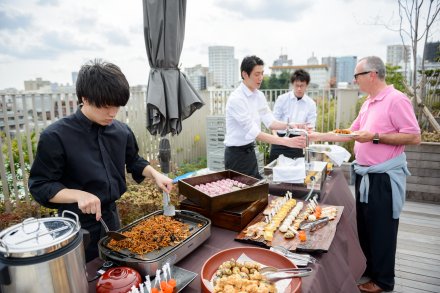 After lunch, while the kids enjoyed playing with traditional Japanese toys and character masks, many of the adults took part in the quintessentially Japanese chadō (tea ceremony).

The natural light pouring in to unit 117—through glass doors that open to a tranquil rock garden—was beautiful. In the soft glow, four masters of chadō demonstrated the artistic and ceremonial process of making matcha (green tea). The beauty and simplicity of the ceremony was on display in the form of the chawan (tea bowl), natsume (tea caddy), kama (kettle), three-tiered lacquered shelf, and kimonos. Simply entering the room brought on a feeling of contentment. 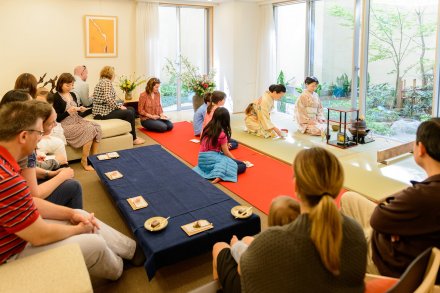 As guests learned, underneath the visual simplicity of chadō is otemae, the intricate process and etiquette of preparing and serving the tea. Watching the masters at work was mesmerizing and ended with a chance to taste the matcha together with confections, some in the shape of sakura. As one guest explained, it was “a very nice and rare experience.” For all, it was a rewarding immersion in Japanese culture, the kind that Azabu Gardens loves providing for our residents. 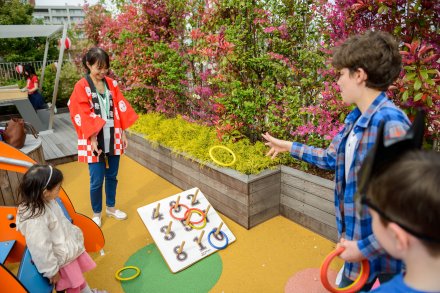 Meanwhile, back on the Rooftop Terrace, children reveled in the atmosphere of ennichi, the summer festivals found across Japan. Azabu Gardens staff wearing happi (Japanese festival coats) played games with them, and the lively atmosphere was fun for all. Ring throwing, smart ball, and traditional toys like kendama (cup-and-ball) and ayatori (cat’s cradle) were a hit with the younger crowd, while Othello and origami captivated the slightly older. Masks, a huge part of summer festivals, allowed kids to transform themselves into classic Japanese characters such as Anpanman, Hello Kitty, and Doraemon, as well as more recent favorites Elsa and Anna from Disney’s Frozen. 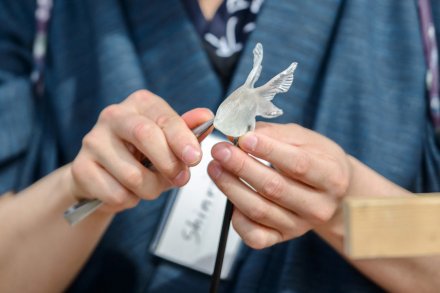 Watching Tezuka in action made the process look simple, though it is anything but. This was a very interesting part of the day because only a few amezaiku masters remain. Keeping traditional arts alive is so important, and Tezuka explained that he has five deshi (pupils) who are learning these skills.

Although it became windy in the afternoon, festivalgoers enjoyed closing the event with more food, drinks, and conversation. It was the perfect place to get together. Many commented on what a wonderful opportunity the day provided to socialize with fellow residents and guests—and how much they look forward to the next event. Heading home with uchiwa ame, the 60 varieties of candy from Ameshin that we prepared as gifts, was icing on the cake.